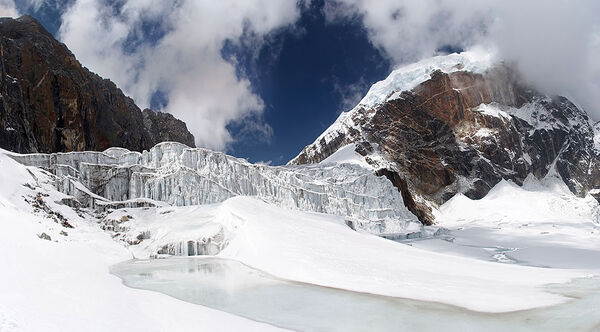 The Earth is in the last throes of the current ice age. Humans have left the planet to find a new home to settle in the universe and much of the world's fresh water is locked up in the huge ice caps that reach as far south as Paris and north to Buenos Aires. On the edges of the ice, animals have adapted to the bitter cold and vicious winters; in the tropics, the rainforest has all but disappeared, replaced by dry savannah. Yet change is in the air - a sudden increase in volcanic eruptions pours greenhouse gases into the atmosphere, the planet begins to warm up, and the melting ice creates massive, devastating floods. 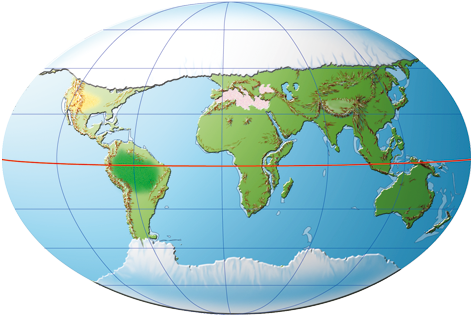 The Amazon grassland lies at the tip of what was once South America. In the Amazon basin, the extensive rainforests are now reduced to a few tiny pockets, surrounded by extensive areas of tall grass savannah with scattered trees.

Rainfall is low, and the Amazon river has dwindled.

In these dry conditions there are frequent bushfires, triggered by lightning or the Sun. The fires cover huge areas at great speed.

Grasses rapidly recover from these fires; slow-growing trees are few.

Global temperatures are five or six degrees Celsius below the present day. There are glaciers in the Alps; and beyond them is the Mediterranean basin.

This is 6,500ft or 2000m below sea level. It has brine lakes and salt flats surrounded by karst - dry, ridged limestone. There are deep cracks in the limestone, called grykes.

When it rarely rains, the surface of the salt turns to a salty mush.

Mountains - once islands - rise out of the plains. They were once Mediterranean islands. Otherwise the surface is completely flat and white. Smudges of red are made by salt-loving bacteria.

The salt flats shimmer. Here and there are lakes of very salty water - ten times the salinity of seawater. They have no fish - only some algae and bacteria can survive. Clouds of brine flies flourish here. In Southern Europe, beyond the icecaps, there are clusters of rowan and birch trees.

The Earth is in another ice age. The ice extends as far south as the northern border of the United States. Central North America is cold and dry. The land has become a vast, barren dust bowl.

The drier climate has had dramatic effects on the interior of the North American continent, turning it into a vast, cool desert frequently battered by fierce sandstorms. The desert is as bitterly cold as the Gobi desert once was. It stretches to the Rocky Mountains - 2400km.

The piercing winds that stir up the sandstorms scour away the soil. A little snow falls infrequently on high ground. Tornados frequently rip across the area.

A few hardy plants survive in these harsh conditions.

The Earth is in a new ice age. Northwest Europe will still be battered by westerlies carrying a lot of water so there will be severe blizzards in the bitterly cold winter.

Ice sheets cover most of N America and all of Scandinavia, and reach down into Northern Europe. Huge icebergs float in the freezing ocean.

Because so much water is locked up in the icecaps, the sea level has fallen by 500ft (150m).

England and France are joined by a frozen plain of sand and gravel - the tundra.

Meltwater gathers in the summer. There are cracked and broken rocks all around. Domes, called pingos, rise up where frozen water has pushed up the rocks.

The few plants are cottongrass, lichens and heather. Some hardy trees like willow grow low and gnarled. All these grow in shallow pockets of soil.

Flies gather around the pools, and are fed on by migrant birds, which spend the winters further south.

Retrieved from "https://thefutureiswild.fandom.com/wiki/5_million_years?oldid=4634"
Community content is available under CC-BY-SA unless otherwise noted.