Ethan is the brave, daring and adventurous member of the Time Flyer crew. He is willing to do most of the more dangerous tasks that the crew's mission provides, while taking them as a personal challenge. Ethan often cracks bad jokes, teases Luis' overly-cautious attitude, as well as Emily, probably because he likes her. In the episode "Phantom Fear", it is shown he is claustrophobic and that he is a natural Jedi.

Ethan is tall, slightly muscular and husky. He has blue eyes, and blond hair that is spiked up. He wears a yellow-striped shirt, with beige pants.

Ethan is brash, over-confident and adventurous. He often acts recklessly, and speaks without thinking beforehand. Although he maybe an inconsiderate jock who pokes at people, he is still a nice guy, and he would put himself in harm's way if anyone is in danger. Of the crew, Ethan is the physical embodiment of the team. He also the joker of the team, but due to his brash, egotistic nature, the everyone else do not find him funny.

Ethan and C.G. are usually at odds because of their conflicting personalities: Ethan being reckless and boastful, and C.G being serious and sensible. He feels that she is too cautious and sheltered, so he is trying to make her be more bold. Despite their antagonistic sides, they are good friends, and they have no romantic interest with each other.

Ethan cares greatly for Emily, and can be overly protective of her when things get dangerous. It is hinted that they have a crush on each other. He sometimes teases Emily in a way a boy shows that he like a girl, and they show a great deal of affection for each other when they are endanger (as seen in "Parent Trap", "Night Crawlers" and "Queen of the Squibbons").

Ethan is good friends with Luis, he teases him for being over cautious and overthinking too much, but he also wants him to come out of his shell (in "A Poggle's Not a Pet...Yet").

Ethan likes Squibbon, he often plays with him (as seen in "Swimming With Slickribbons" and "Shallow Pals"), and teaches him things with the intention of annoying Emily.

Ethan, along with Emily and Luis, weren't pleased by C.G.'s father because he considered them "primitives." But slowly, he had a change of heart and warmed up to them. 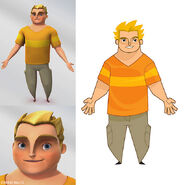 Ethan full-figure by Wildgirl2000
Add a photo to this gallery
Retrieved from "https://thefutureiswild.fandom.com/wiki/Ethan?oldid=4686"
Community content is available under CC-BY-SA unless otherwise noted.